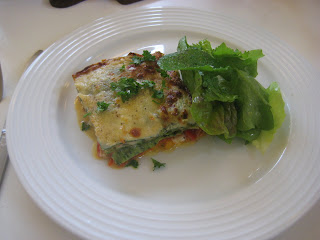 Tuesday morning's kitchen hummed with the sounds of whirring pasta rollers and simmering ragu's. We were basically in a sweatshop rolling sheets and sheets of pasta. I made vegetarian lasagna with pasta verde (spinach pasta). You basically wilt some spinach, throw it in a Cuisinart, add some flour and one egg, and press go! That is IT! When it becomes coarse meal, ball it up and get rolling. The hardest part for this pathetic weakling was squeezing out every ounce of water from the wilted spinach before it went into the food processor. I need to hit the weights. 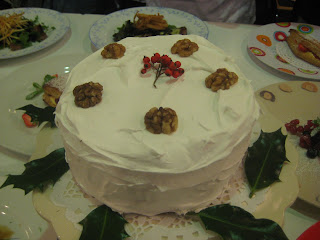 In between rolling pasta, I also made puff pastry to use later this week. The important thing with puff pastry is to really align the edges each time you fold it. If they're rounded and uneven, you'll get uneven layering, and your pastry won't puff up uniformly. So, pretend it is a very important letter, and fold it into thirds perfectly. You might need to manipulate the edges to get them into perfect corners. For the record, puff pastry is not arduous to make, and tastes so much better than store bought (which is rarely made with real butter). 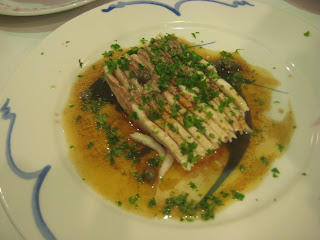 Then it was time to carbo-load! At lunch, I could have used a shovel.

During the afternoon demonstration, our headmistress made a warm salad with beef fillet medallions, a warm salad with lamb's kidneys, different dishes made with Ray or Skate, Tarte Tatin (the king of French tarts), walnut cake, creme brulee, "mille feuille", chocolate truffles and Irish Coffee! 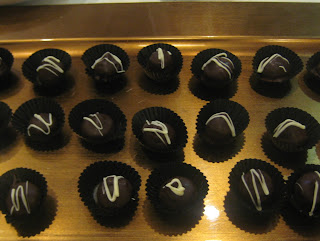 Though Ray or Skate are rather large fish (they look like kites), you really only eat the "wings". And, unlike most fish, Skate is best eaten a few days after it is caught, or else it will be rather tough. Its best simply poached and drizzled with a little "black butter" (AKA butter browned in a saucepan and splashed with white wine vinegar - do this right before serving). 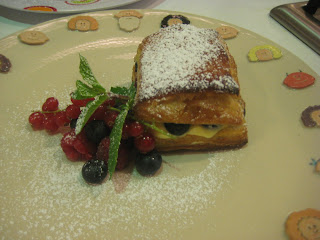 After class, our headmistress gave an evening talk on how to start a Farmer's Market. They are the perfect solution to consumer demand for fresh, local foods, and farmer (or artisan producer) supply of excess goods. Our headmistress started the first farmer's market in Ireland, after taking a page out of San Fransisco's book. Now, they are all over the country! Some small scale producers and free range farmers survive off farmer's market sales alone. It is a great way to bring business into a community.

- To prepare kidneys, peel off any "suet" remaining (the thick, protective fat layer surrounding the organ). Then, cut them in half lengthwise so that you can open it up like a butterfly. Peel off the outer membrane, and remove any inner "plumbing". With a quick wash, they'll be ready to sear, bake, chop, etc!

- "Tarte Tatin", the quintessential French Tart, is a neatly arranged display of apple halves, sitting proud in a sea of caramel, upon a bed of pastry. You make it in a saucepan on the stove top, melting the caramel first, then adding the apples. When the mixture gets uncomfortably dark (it will look burnt... hold your nerve... no guts no glory), you add the pastry layer and pop it in the oven. If you don't let the sugar caramelize to a really dark color, it will taste too sweet.
- "Mille Feuille" is a three-tiered sandwich made of puff pastry layers and various filling. The puff pastry is cooked plain, then dredged in sugar and thrown under a hot grill to caramelize on both sides. You build the "club-sandwich" with the caramelized puff pastry sheets, jam, pastry cream, and whipped cream. It's delicious!
Posted by Binny at 1:03 AM