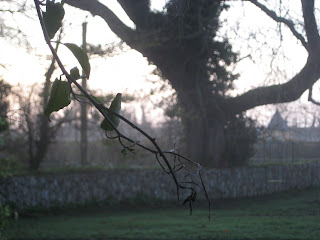 Today began hilariously. I awoke to put my risen boulle of sour dough in the oven, and came downstairs to see that this boulle suffered from Dopey-of-the-Seven-Dwarf's Hat Syndrome (DSDHS). There was a huge bulging air bubble, about the size of a grapefruit, coming out of the loaf. Apparently, sour dough gets exam day jitters as well. I quickly cursed myself for leaving the bread until an hour before my exam, rather than making it safely the night before. My desire for a fresh loaf outweighed my fear that something may go wrong last minute. So, what could I do but just pop the bubble, say a quick prayer, and throw the mangled, misbehaving mess in the oven? For a laugh, here's what came out: 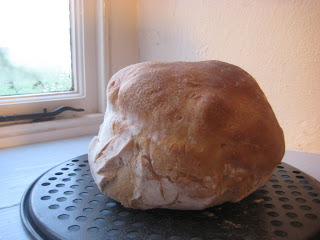 I took my ridiculous excuse for a loaf over to the school, trying to hide it from the view of any examiners. I hoped that I'd be able to get at least one decent slice from it to serve up with the salmon. My time started at 9 AM, and I didn't finish until 12:30! I was an hour over time (because of my 30 minute Cook Ahead, I was supposed to finish at 11:30)! Slow and steady wins the race? Better late than never? It's the thought that counts? You pick one. 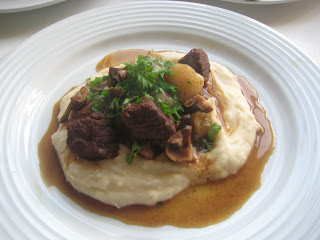 I forgot to tell you that each student is required to make a bread during his or her exam in addition to the 3 courses. We drew lots for which type of bread, and I got white yeast rolls. So, this morning, I made said rolls, plus rillettes of fresh and smoked salmon, Boeuf Bourguignone with Pomme Mousseline, a winter green salad with balsamic vinaigrette, and 8 individual Grand Marnier Souffles. Wow, that list is rather small now that I write it. But it seemed like twice that many this morning! 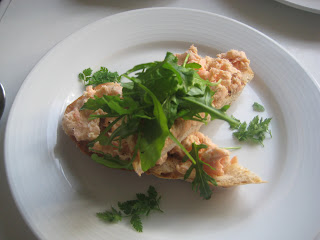 The sour dough was as cavernous as St. Patrick's Cathedral, with huge air pockets trapped below the crust. I was, however, luckily able to get a decent slice for my presentation. The Boeuf Bourguignone was fine, as were the "pommes" and the rolls. My souffle (thank heavens!) rose! 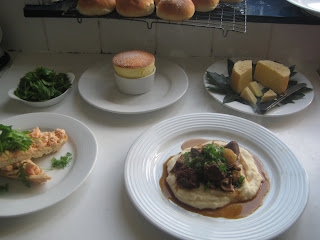 And, last but not least, my young cheese became a man. After six weeks of watchful waiting, I cut him open and served him to the examiners for a little nibble. I don't know if it was all the tender, loving care that I gave him as an infant, or the reassuring support I lent him as a teen, but He. Was. Terrible. I practically needed a chainsaw to cut him open! Semi-hard? More like hard as a frozen rock. Am I a bad mother?! Maybe I was too hard on him. As icing on the cake, the ivy leaves on which I served him (which I picked en route to school this morning) are apparently poisonous. 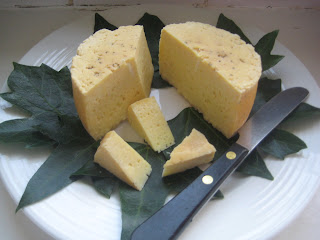 All in a day's work! Now, off to study for our written exams tomorrow. If I fail, I'm blaming you all.
Posted by Binny at 2:17 PM