A quick note about yesterday's post! Instead of searching the tea isle at your local grocer for "rosemary tea" or "pomfrey tea", buy the herbs fresh and pour hot water over a sprig in a mug. This goes for any herbal tea. It is a great way to use up fresh herbs before they go bad (mint, in particular!).

Now onto day six, Friday, the culmination of our first week. I woke up early with the roosters and over-achievers to have an optional lesson on organic gardening. Most of the gardener's tips went over my non-green-thumbed head, but he did manage to convey a few maxims. For one, if you are growing a vine-like plant such as tomatoes or cucumbers, and you wish to train them to grow up a string, always wrap it around in a clockwise direction. This way, as the plant follows the sun, it will continue to wrap around the string rather than unwind. 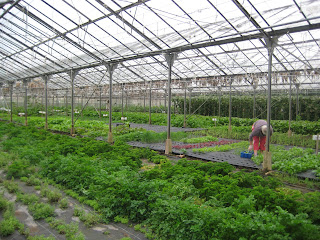 After, we gathered in the demonstration room for a "theory day" with surprise guest lecturer Carl Ehrhard, owner of a vineyard in Rudesheim, a small village in Germany (http://www.carl-ehrhard.de/). He was in town selling his wine (Riesling and Pinot Noir) to The Ballymaloe House, the hotel up the road. Despite the fact that it was before noon and we all had empty stomachs, Carl (and the Ballymaloe House sommelier) launched into a full on wine tasting session! I think those who had over-indulged at The Goal Post pub the night before (celebrating Guinness's 250th anniversary) were grateful for the hangover cure. He explained that there is an old tradition of wine making in Germany, particularly in the Rheingau region, dating back to the Roman Empire. He had a rather thick accent, but I believe he said that in the twentieth century, German wine making had to overcome numerous hurdles to get where it is today. Beside the pesky World Wars and depressions, Carl explained that they have had to battle the unfortunate connotations connecting Rieslings, Germany's signature wine, to cheap, sweet wine. The tides have turned, however. No longer produced as overpoweringly sweet, the Rieslings we tasted were delicious to serve with food. Our headmistress insists that "Riesling is the new chardonnay". So, if you want to be in vogue on a night out at dinner, order a Riesling!

Carl's basic message was drink what you think tastes good, and not what others tell you should taste good. He ended joking, in a thick German accent, that "Riesling and Pinot Noir are the women of the varieties... they do what I want". I'll let the feminists gasp, but I think he meant that they are the most delicate and "emotional" of the white and red categories. He likened Pinot Noir to a "ballerina" (whatever that means).
Flush-faced and tipsy, we enjoyed a quick lunch before launching into a lecture on food safety and kitchen hygiene. Take it with a grain of organic sea salt, but our headmistress does not allow anti-bacterial soap in the school. She prefers the old fashioned hot water, regular soap, and elbow grease approach. She blames the rise of "jibbly tummies" and incessant colds on the sterilizing Lysol sprays and antibacterial gels, which wipe out any chance our immune systems have to build up antibodies. Reared on unpasteurized milk and always one to "challenge the system with good bacteria", she boasts she is always the "last one standing" on group trips to India or Asia. This is not to say that her kitchen runs wild with germs- quite the opposite! I just thought it was an interesting perspective. Another way-of-life tip from the Ballymaloe Cookery School! 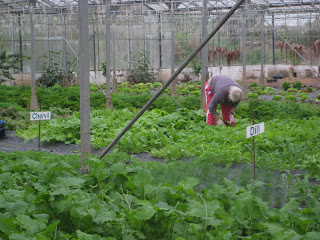