You know you are at an eccentric cooking school when "she's milking" is an acceptable explanation for a student's absence during morning roll call. Our headmistress didn't bat an eye although the room got a chuckle. As our morning focused on this magical ingredient, it was a fitting start to the day. The "milking" student soon entered with a large pail of steaming fresh milk, straight from the udder. She poured it into an electric milk separator, which slowly began leaking from two spouts - one with milk and one with cream. Apparently the school used to separate the milk with a hand cranking machine, but recently caved and splurged on an electric one (bought for 700 euro, or around $1,000!).

As I have mentioned before, our headmistress and her family only drink unpasteurized (raw) milk. They do so quite confidently because they know their dairy operates under the highest standards of hygiene, and they strongly believe in the health benefits of raw milk consumption. Apparently, others are beginning to realize this as well. In the US, the demand is growing rapidly for raw milk from farms such as Straus Family Creamery north of San Francisco (http://www.strausfamilycreamery.com/) or the Hudson Milk Company in New York (http://www.hudsonmilk.com/). To find a farm in your area, check out this trusty website I found: www.realmilk.com/where2.html. In Italy, consumers can purchase raw milk through vending machines which have been popping up all over the country. The demand has grown so rapidly in the last three years that raw milk now holds 10% market share of total milk consumed.

Many attribute the growth in food allergies and asthma to the decline of raw milk consumption. Also, the widespread homogenization of milk (where a machine breaks the fat globules down into the milk, so that they do not rise to the top naturally) has been attributed to the rise in cholesterol problems. The fat globules, normally skimmed off the top of the milk and discarded, are consumed and stick to the arteries (this is a very non-scientific explanation). For all the skeptics out there, it is worth a second look.

So, with this raw, fresh milk, we set out to make butter, yogurt, buttermilk, cottage cheese, soft yogurt cheese (or "labne"), paneer (an Indian cheese), a simple semi-hard cheese, ricotta and coeur a la creme. Before beginning, she sterilized all her equipment with boiling water (a crucial step). For butter, she simply whipped the cream slowly for a duration of time until butter formed and buttermilk sloshed around in the bowl. For yogurt, she mixed milk and cream with yogurt over heat. The yogurt acted as a "starter" for the bacteria to multiply and make more yogurt. For the cheeses, the basic formula is milk, a "starter" (to introduce a bacteria) and rennet (to coagulate the milk). Each cheese type (blue, brie, etc.) has a different starter. Once the starter and the rennet have time to work, the milk will turn to "curds" (the solid) and "whey" (the liquid). Placing the curdled milk into muslin or cheesecloth is a great way to drain off the excess whey. This is obviously over-simplified for the sake of brevity. If you are interested, look up some recipes for the exact steps and try it one afternoon with friends!

One final cheese tip- whey is great for the skin (Cleopatra used to bathe in it). 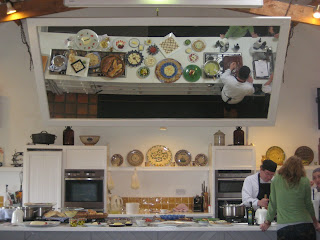 After our lunch break, we sat down to another lecture from the sommelier Colm McCan at the Ballymaloe House (the world class restaurant up the road). He gave this beginner a great way to start classifying wines (as it can get confusing). Basically, there are four styles of white wines and five styles of reds (this excludes roses, sparkling wine, and sweet wines). Before I list them, here are some helpful definitions.

- The "body" of the wine is the texture in your mouth. Light bodied is like water, full bodied is like Guinness.
- Generally, the more "body", the more it can pair up against food flavors. Light bodied whites are good with a gentle filet of sole, full bodied reds are great with hearty venison or steak.
- "Old World" wines come from Europe, "New World" wines come from outside Europe (the Americas, Australia, etc.)
- There are many types of grape varieties: Chardonnay, Sauvignon Blanc, Riesling, Merlot, Pinot Noir, Cabernet Sauvignon, Syrah or Shiraz, and Sangiovese
- Most "new world" wines are named after the grape variety, while "old world" French wines are named after the region in which they are produced (Burgundy, Chablis, Bordeaux, etc.)

Now, onto the wine guide classification, listed in order from "light bodied" to "full bodied" wines:

That is quite a lot of information, I know! But I found it incredibly useful as a beginner's guide to start thinking about wine. I hope you do as well. We then tasted five different types (a Chablis, a Chardonnay, a Sancerre, a Merlot, and a Syrah). It was a jolly afternoon, followed by a rather sloppy game of doubles with some other tipsy classmates on the school's court! I think I will stop there as I do not want to lose my audience with too much information. Until tomorrow...
Posted by Binny at 11:10 AM