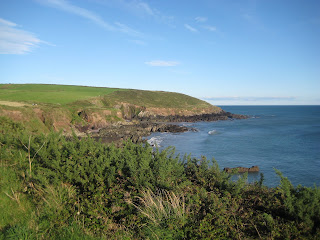 We always cross the mid week hump with a theory day. Today focused on the art of butchery, South African wines, tips for freezing your food, and the use of spices. But, as I have learned, we cannot begin a theory day without first making the "biscuit of the week". This week we made chocolate and toffee squares (or "millionaire squares", aptly named because they are so expensive to bake!). To do so, we layered shortcake pastry, homemade toffee, and melted dark chocolate in a baking tray. The toffee is basically sugar, butter and condensed milk that you constantly stir while it boils away in a saucepan. To test if it is ready (i.e. the right firmness: somewhere between gloopy and pull-your-teeth-out hard), plunge a teaspoon of the hot toffee into cold water and wait for it to cool. Like jams and jellies, you are going to eat toffee cold (or at room temperature) so you must test it when it is cold.
There was a surprise visit from sixth generation lamb farmer William Drohan of Comeragh Mountain Lamb (http://www.comeraghmountainlamb.ie/). William's flock enjoys the benefits of grazing on herbs, grasses, and wild flowers across pastures high in the Comeragh Mountains. Reared with care and happy until the end, these animals produce top quality meat. As our headmistress said, it is mavericks like William who are leading the way back to where food should come from. With so many large companies still focused on quantity rather than quality, think about where you spend your money and who you want to support! 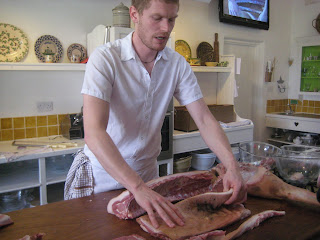 Then arrived Philip Dennhardt, master butcher, with a pig carcass halved lengthwise from head to tail. Philip is a fourth generation German butcher, who has worked everywhere from Chez Panisse in Berkeley to Grand Central Market in New York. As the quality of pre-butchered retail meat has decreased, his trade has grown in popularity. More restaurants are buying entire carcasses to hang in cold rooms and butcher in-house. The difference in quality is undeniable. 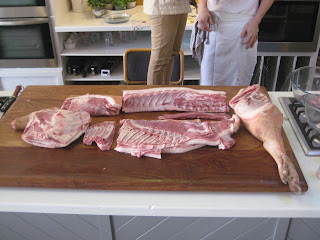 Pigs are remarkably similar to humans biologically (and mentally, depending on which human we're talking about!). We watched as Philip gracefully glided along the natural seams of the animal, rather than hacking Texas-Chainsaw-esque through muscle fibers (which damages the meat because you lose succulent juices). Within no time, he had separated the leg, the shoulder, the loin (AKA back), and the belly. He then showed us how to cure bacon, coppa, gianciale, and pancetta and how to make sausages and salami. Nothing is wasted (they even boil the head to make "brawn", a terrine of jellied meat). A noble end for a happy pig!

Our culture is changing as quality food becomes more of a priority. As Philip says, "you're not a hero anymore if you work in a bank and drive a sports car". Rather, it is the artisans who make their own compost or cure their own meats or brew their own beer who are really turning heads! 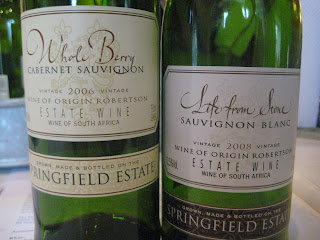 We broke for lunch, and then returned for a quick wine tasting session with Jeanette Bruwer, the owner of Springfield Estate in Robertson, South Africa (http://www.springfieldestate.com/). Jeanette and her brother Abrie are fourth generation wine farmers. A family run vineyard, the Springfield Estate grows grapes organically, but does not put "organic" on the label ("we sell wine. We don't sell labels"). We tasted a 2008 Sauvignon Blanc and a 2005 Cabernet Sauvignon, and both were excellent. Interestingly enough, due to the opposing Indian Ocean and Antarctica currents, 90 % of all the grapes grown in South Africa are within a 2 hour drive from Cape Town.

Finally, we finished the afternoon with a quick talk from Rory on freezing foods and a final lecture on spices from 2004 Ballymaloe Cookery School graduate, Arun Kapil of Green Saffron (http://www.greensaffron.com/). Green Saffron is a small family business which seeks to provide the highest quality spices to its customers. Arun and his relatives travel to India and meet directly with spice growers to personally bring back small quantities to sell in Ireland, London, or to order. They also make their own spice mixes to sell in packets complete with recipes on how to use them. It is the ultimate "fast food" - just saute some onions, add the spice packet, add some meat, maybe some stock, and you're golden. We taste-tested a few, and they were out of this world. 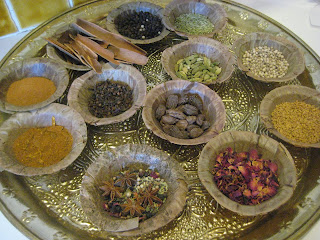 Today's Tips:
- In Rory's freezer, you will always find stock, puff pastry, frozen fruit, and butter (he told me this, I did NOT go breaking into his house... yet)
- According to Philip, "California is the way forward, food wise"
- It is very important not to stress an animal before it is slaughtered, or you will toughen the meat. This goes for everything from pigs to crabs.
- Season meat the night before you cook it, when possible. The salt will break down the fibers and tenderize the meat. Ina Garten (AKA the Barefoot Contessa) recommends that you should sprinkle meat with salt as soon as you bring it home from the grocery store before storing it in the fridge.
- Salt takes 30 seconds to dissolve into a sauce or soup. Therefore, give the salt time to do so before tasting the soup to judge if it needs more seasoning!
- Try curing your own meat! Anyone can do it, so long as he or she has plenty of salt, a cool and dry area to hang the meat, and some patience.
- With fish, the fresher, the plainer, the better. Sometimes, a sprinkle of olive oil, salt and pepper and maybe some fresh herbs goes a long way.
- There is no right or wrong in wine, so don't be shy about stating what you think! Wines are very personal, and are meant to be enjoyed. If you like it, that's all that matters.
- Bone dry Sauvignon Blanc makes a great aperitif, because the acidity prepares the stomach for food.
Posted by Binny at 10:42 AM