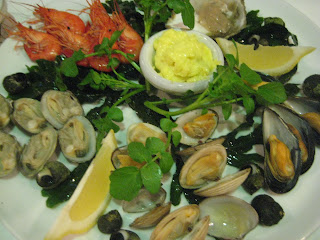 Forty. I guess I'm officially "middle aged" in the land of the Ballymaloe 12 Week Course. I started work this morning making a granary loaf, made with granary flour (a mix of malted wheat, rye, and whole wheat kernels). It is a straight forward yeast bread which took an eternity to rise (the thick granary flour really weighed down the dough). So, in the meantime, I worked on a Lamb Stew with onions, carrots and turnips (turnips are in season!). When I think stew, I think Le Creuset (http://www.lecreuset.com/). This company will hold a special place in my heart until the day that I die! Like Kleenex or Pampers, Le Creuset is synonymous for the product they produce: the cast iron "french oven". They are expensive, but last a lifetime! 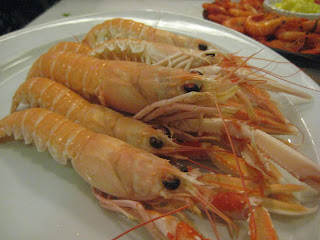 While my stew stewed in the oven, and my dough rose ever so reluctantly, I made some mashed turnips with caramelized onions on top. We also went over some of the techniques for tomorrow's exam, including segmenting an orange, making an omelette, and fashioning a paper piping bag. I love the midterm buzz circulating the school grounds. Walk into any cottage after school, and you'll find students hovering over a discount, store bought chicken (3 for 10 quid!), slowly following the steps to dejoint it. The spectators congratulate the dejointer as he or she successfully pops the leg out of its socket and locates the dreaded oyster. Still others are chopping away at onions or filleting a fish. It beats any midterm studying I can remember! 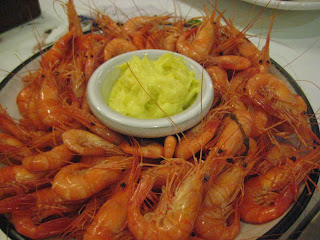 For the afternoon demonstration, we watched our headmistress make a plateau de fruits de mer, comprised of prawns, shrimp, mussels, clams, periwinkles, and oysters. She garnished the platter with a few wedges of lemon, some freshly foraged watercress, and some seaweed gathered from Ballycotton Beach. We also learned how to make a meat pie with homemade pastry, poached plums, banana bread, gingerbread, carrot cake, and parsnip and maple syrup cake. 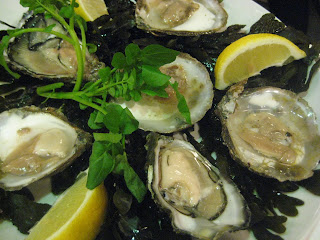 Your daily dose...
- When making stew, season each element well before adding it to the pot to cook.
- Generally, you should only eat oysters in months with a letter R in them (September through April). With oysters, do not bother if they are not fresh. When they're fresh, the simpler the better! Right down the hatch!
- With bivalves (mussels, clams, cockles, palourdes), do not buy or cook them unless they are alive! You can tell they're alive because the shells will be tightly shut. If one is slightly open, tap it a few times and the animal inside with snap it shut (if it does not shut, it's dead - do not cook it). Once cooked, they open on their own. Again, if some do not open, do not eat them.
- Irish Moss, or carrageen, is a wonderfully nutritious type of seaweed. It boosts your metabolism to break down fats, and is good for chest colds. You can find it in specialty shops!
- If you have a fruit that is inedibly under-ripe (plums, peaches, etc), try poaching them! They will soften and burst with flavor.
- My friends and I always joke about Ina Garten's obsession with "good vanilla extract". What she really means is Expensive vanilla extract! If you are tight on cash, but recognize the difference that quality vanilla extract makes, try making your own! Soak a few vanilla pods in a couple cups of vodka or brandy for a few weeks. It sounds crazy, but I'm curious (and broke) enough to try it.
Posted by Binny at 12:13 PM