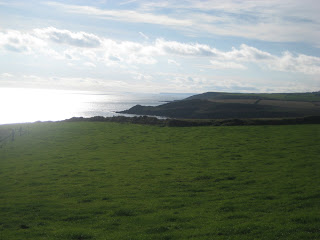 My typical Tuesday began with a trip to the greenhouse to memorize some greens. After that thrilling adventure, it was off to the kitchens for a morning of cooking! On the list for today were chocolate profiteroles and mini gratins of goats cheese and sundried tomato. It doesn't sound like much, but those sneaky profiteroles hide about four elements in one title. First I made the Choux "easier said than done" Pastry. I nearly passed out with exhaustion. Every fiber in my being burned as I dutifully "beat each egg vigorously" into the dough. Ten minutes and four and a half eggs later, I was ready to keel over. Apparently, you are supposed to "let the wooden spoon do the work", whatever that means.

After piping some blobs of pastry for the "puffs" and carrying the baking tray (with quivering, weary, spaghetti arms) to the oven, I moved onto the Creme Patisserie, or Pastry Cream (basically vanilla flavored custard). Then there was the Chantilly cream (AKA whipped cream and sugar), which gets folded into the Pastry Cream. I piped the Pastry/Chantilly Cream dynamic duo into the cooked puffs, and then made some chocolate sauce to top it all off. Delirious, I promptly ate approximately 5 profiteroles out of sheer exhaustion.

Somewhere in the whirlwind morning, I filleted a spare cod lying around for practice (you can tell it's a cod because it has a small goatee protruding from its chin, and because your teacher tells you it's a cod). Then we were off to lunch. 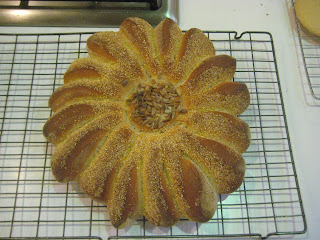 Despite (or perhaps because of) a "post bank holiday silence" in the room, the afternoon demonstration went well. We watched our teacher make various fish pates, breadsticks and "sunflower bread" (pictured above), different lamb stews, shortbread cookies, and fruit "fool". Fool is a dessert made with pureed fruit mixed with whipped cream, served cold with shortbread cookies. You can make raspberry fool, or blackcurrant fool, or, if you're Mr. T, whatever type of fool your heart pities. 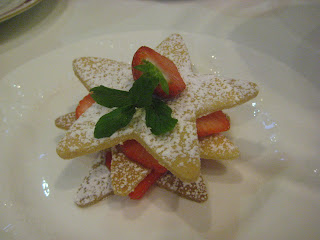 As far as pates go, I have to admit they were pretty tasty. If you're like me and you're intrinsically wary of pate, try making it yourself so you can be sure about what the heck is in it. It's definitely more comforting and often more delicious. 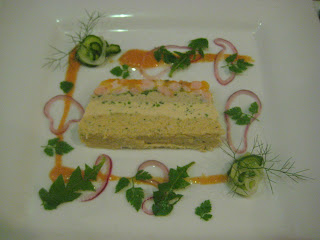 - Contrary to popular belief, browning meat before you put it in a stew does not seal in the juices. It does, however, greatly enhance the flavor- so keep at it!

- When making gravy, remember the cardinal rule: "degrease and deglaze". First, degrease the juices in the baking pan by skimming off any fat. Then, deglaze the pan by pouring in some stock and whisking up any precious flavor that has "glazed" to the bottom. This forms the base of your gravy.

- Nothing thinly slices a vegetable better than a Japanese mandolin. For shaving fennel bulbs for a salad or potatoes for potato chips, there's no substitute! If you find yourself desperate for a Japanese Mandolin, get one with removable blades so that you can sharpen it as it wears.

- Turnips are in season - try them out! Mashed, roasted, thrown into stew - the possibilities are endless (sort of).