Saturday morning I found myself waking up in Roscommon Town in Northwest Ireland. Neither kidnapped nor teleported, I had driven up the night before with two other students to stay for the weekend. Our four hour trip involved a few wrong turns, a lot of countryside viewing, and a briefer than brief stop at the Rock of Cashel. It is big, beautiful, and packed with history. That's about all I can tell you about this landmark. But, I have the picture to prove I was there (I'm the minuscule tourist in the foreground)! 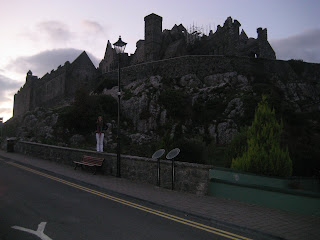 We decided on the roadtrip that we would climb Croagh Patrick Saturday morning, a mountain south of Westport on the northwest coast. Against all odds (and by odds I mean pints of Guinness), we actually got out of bed to do it! After a ninety minute ride, my heart stopped when I saw what we had signed up for. Rising 2,500 feet above sea level, this steep cliff is not for the faint of heart (the picture doesn't do it justice). 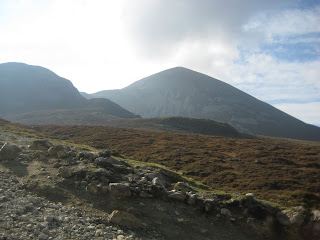 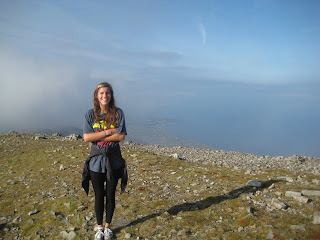 Pilgrims flock from around the world to ascend the summit in honor of Ireland's own St. Patrick, who fasted on the slope for 40 days and 40 nights in the fifth century AD. Some particularly penitent pilgrims climb barefoot or even on their knees! I saw one such character on my way down, and have to admit I felt a little wimpy for not trying this myself (maybe next time!). The guidebooks reckon it takes about 2 hours to reach the top, but we made it in an hour and ten (it's all that organic Ballymaloe energy!). 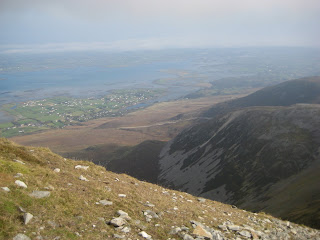 It was a great experience, and I will definitely try to work it in if I am lucky enough to make it back to Ireland later in life. Funnily enough, after a conversation with my Mom Sunday evening, I discovered that I had been there before! When my family came to stay at the Ballymaloe House in 1988, we were finishing a week long trip which began with a pilgrimage to Knock and Croagh Patrick. My parents, their five children (six if you include the baby in my mother's womb!), and one very devoted babysitter made it halfway up (the summit is too treacherous for kids). Come to think about it, I thought it looked familiar... 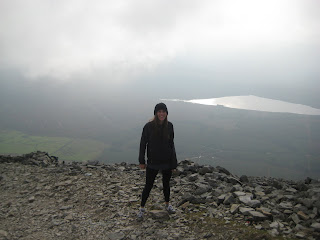 Shaky legged and parched, we made it back to the car park. A bowl of tomato and basil soup in Westport (winner of the 2001, 2006, and 2008 "Tidiest Town" award) hit the spot. We rounded out the afternoon at a Gaelic football match, a traditional Irish sport that lies somewhere between soccer and rugby. My host's two younger brothers were playing for the Roscommon team. As it goes, they won.