Friday! It felt great to get back into the kitchens after a two day hiatus. I filleted a flat fish (a Plaice to be exact), whisked up a coriander aioli, segmented a grapefruit, practiced an omelette, constructed a piping bag with parchment paper (a technique we'll be tested on), and compiled a Provencale Bean Stew. 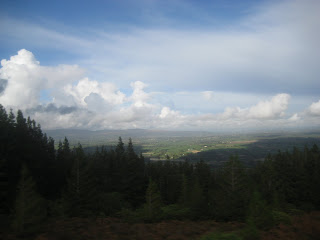 It was easier to fillet a flat fish compared to a round fish, because the former does not have "pin bones" protruding perpendicularly from its backbone. Pin bones are pesky little things that can be difficult to get out without damaging the fillet (if you've ever had a bone in your fish, it was probably a pin bone). With flat fish, the fillet comes right off the backbone, and you don't have to worry about picking out any pins. If you're doing this at home, make sure you have a flexible filleting knife- it makes all the difference! Trying to fillet a fish with a chopping knife is like trying to needlepoint with a chopstick.


Anyone can make his or her own aioli quite simply with the help of a food processor. Just mix egg yolks, some Dijon mustard (if you like), and any herbs (dill, coriander, basil, whatever...) in a Cuisinart while slowly drizzling in oil. It will soon emulsify, et voila! Homemade Aioli. You can play around with different flavors (sun-dried tomatoes, lemon, etc) to your heart's content. 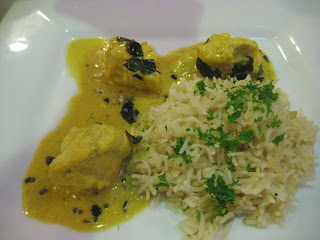 For afternoon demo, Rory showed us how to make various forms of a warm goats cheese salad, a granary bread (made with granary flour: a mix of malted wheat, rye, and whole wheat kernels), various fish dishes, profiteroles, and cheese puffs (made with choux pastry and Gruyere cheese). Before he began, we had a quick visit from Jane Murphy of Ardsallagh Goat's Cheese (http://www.ardsallaghgoats.com/). Like many of the Irish cheesemakers we've met, Jane's award winning cheese started by chance. 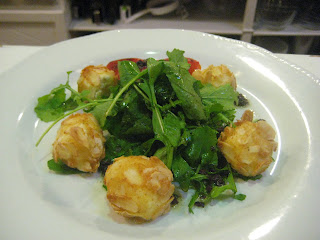 Three decades ago, her two young children had eczema. A traveling salesman noticed their skin and recommended introducing goats milk into their diet. After being dismissed, the salesman went so far as to return with a goat (I am not making this up), and the Murphy's herd began. Jane discovered a knack and love for cheesemaking, and decided to go commercial. Now, they sell goats milk, hard and soft cheeses, and yogurt to supermarkets and at farmers markets around the country. They milked the herd by hand up until it grew to 60 goats, and then started to use machinery. When the herd breeds to an unmanageable size, Jane donates goats to Bothar (http://www.bothar.ie/), a charity which sends livestock to villages in Africa. The two children, eczema-free, are now in the cheesemaking business themselves.

- At this time of year, walnuts are at their best.

- It takes over 4,000 crocuses to produce one ounce of saffron.

- With profiteroles, the pastry should be crisp, the filling, cold, and the chocolate sauce, hot. 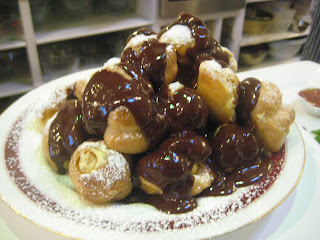