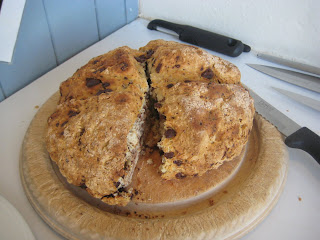 I used to make fun of helicopter parents, hovering over their children, making them wear elbow pads when they went sledding. And now I know how they feel. My cheese made it through the night. He looked a little shaken in his new home, but I am hoping he'll get used to it. After flipping him over and dusting him with salt, I headed off to school. 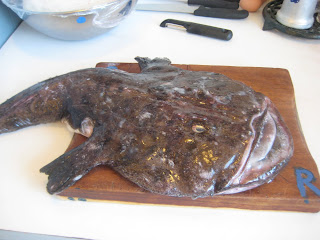 This morning, I made poached monkfish with cucumber and tomato hollandaise sauce, kale, and a "stripy cat" loaf (AKA white soda bread with chocolate chunks). Monkfish are DIS-gusting. Seriously gross. I am surprised they haven't been featured in a D-grade horror movie yet (like "Bride of Chucky"). However, they are a good example of true beauty coming from the inside (whatever that means... kidding). Their flesh is beautifully white and delicious, behaves much like meat, and is deceptively easy to fillet (you only have to worry about the straightforward backbone). Because of these perks, Monkfish are quite expensive. Apparently, buying the fish whole is less expensive than buying a fillet. But then you have to carry one of those mucus oozing bad boys out to your minivan, so I'll let you make the choice. 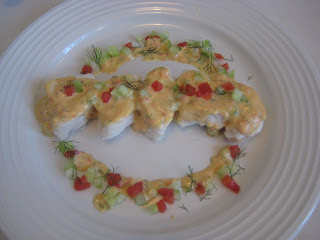 The hollandaise sauce went surprisingly well (it only tried to curdle on me once). One trick when it's entertaining the idea of curdling: plunge the saucepan in a bowl of cold water to bring down the temperature (it's handy to keep a bowl nearby when you're making it). Another trick: don't let the sauce know you're nervous. Like dogs and David Hasselholf, hollandaise can smell fear. You're the boss. Beat it into submission. 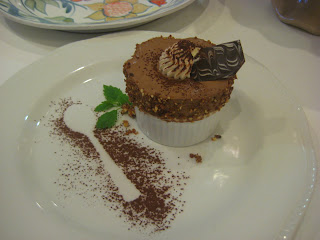 During our afternoon demonstration, Rory showed us how to make a couple of Asian soups (chicken & coconut laksa and Thai galangal & coriander soup), different curries (both red and green), brioche, chocolate or lemon souffle, and, bizarrely, pickled ox tongue. I am still trying to piece together why anyone would ever eat, let alone make his or her own, pickled ox tongue (but then again I haven't tried it). The souffles were cold souffles, which are easier to make then hot souffles (I think we tackle hot souffles next week). The cold souffle is basically mousse, which looks like it is puffing up over the souffle dish because of a parchment paper trick. Rory wrapped the dish in greased paper to extend the sides of the dish about an inch and a half higher. He then over-poured the mixture into it, and the parchment paper wall kept the mousse from running over. When the mousse set, he took away the paper, and it looked just like a souffle. They have a great "wow" factor, and can keep in the fridge until you're ready to serve them. 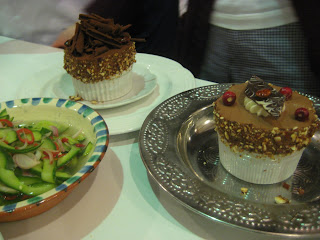 - Crack eggs into a separate bowl before adding them to your dish. Today, Rory cracked a bad egg into the brioche and had to start over. It doesn't happen often, but it's a good precaution to take.

- You know gelatin has completely dissolved into water when it is completely clear. If the water is still cloudy, wait!

- Egg whites are really just a way to trap air in a dish ("they don't bring anything else to the party" -Rory). This makes the dish lighter.

- Curry paste is very hot when you first open the package. It loses a significant amount of heat within a week of being opened.

- If you have all the time in the world, you can make curry paste by hand. But, you can buy very good quality paste at the store and save yourself the hassle of tracking down all those obscure ingredients (such as "shrimp paste" and "fresh galangal").

- Try serving brandied cherries with a dangerously rich chocolate dessert (the hit of alcohol "shocks you back to the real world" - Rory). Buy cherries, de-stone them, and put them in a jar filled with 1/2 brandy and 1/2 sugar. Shake it up and they'll be good to go in 2 weeks time.
Posted by Binny at 11:22 AM