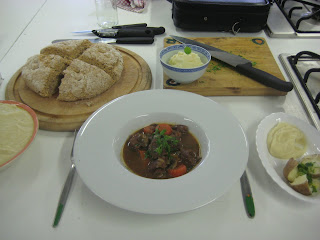 This morning I got in early to make brown soda bread and to check in on my Lazy-with-a-capital-L sourdough. Much to my dismay, the boules STILL hadn't risen (the little brats)! And what's worse (I know what you're thinking, how can it possibly get worse?!), it. had. formed. a. SKIN. Quelle horreur! Contemplating a sourdough massacre, I sought the advice of our headmistress' husband, an expert bread maker, who was fortuitously in the kitchen. After some prodding, he noted that it was still "alive" (phew!), but I needed to paint it with olive oil to keep the skin from hardening. Then we found a black garbage bag and put the boules into it. No, no: not to throw them away (although I was ready to). Rather, the bag creates a nice warm atmosphere for the bread to "prove" (rise) in. We put the bag in a warm corner, and I went back to playing the waiting game... 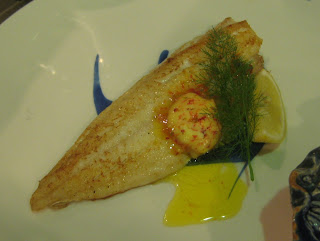 Unlike the cheeky sourdough, the brown soda bread bended to my will and went into the oven pronto. After that was out of the way, I focused on the Italian Beef Stew. We had the most delicious beef to work with (from a cow born and reared on the farm). Trim any fat or grizzle off the chunks of meat. No one wants a mouthful of chewy fat in their succulent beef stew! I also made a celeriac and apple puree (a delicious and zingy dish- great with game!), puff "cardiac arrest" pastry, and steamed potatoes. 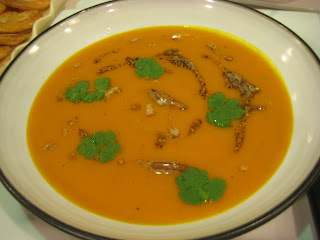 For the afternoon demonstration, Rachel Allen (our headmistress' daughter-in-law and Ireland's favorite cook) showed us how to make ciabatta, seafood chowder, pumpkin soup, various types of pan-grilled fish, lentil and chili "risotto" (named because of the method we cooked it, not because there was risotto in the dish), confit de canard, leeks with yellow peppers and marjoram, gateau pithivier, jalousie, and sacristains. 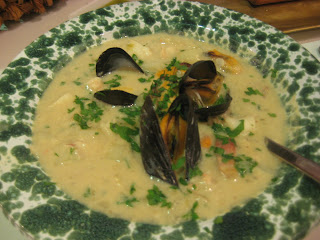 For anyone who shares my lack of French cuisine knowledge, here are some definitions:

- Confit de canard, or duck confit, is an old French way of preserving duck meat. You basically stew the meat and then store it covered in fat, which acts as a preservative. You can also have pork confit, chicken leg confit, pheasant confit - it works best with meat still on the bone. Originally used to preserve game throughout the winter, now we make and eat it for fun.

- Gateau Pithivier is a French traditional tart made with puff pastry (both as the base and the lid) and filled with an almond mixture. I am sure you could make it with other fillings as well, but hey, what do I know?

- Jalousie is another French way to use up puff pastry. It is basically a fancy word for a puff pastry sleeping bag filled with anything you wish (almond paste, apricot jam, apple puree, cheese, etc).

- Sacristains are twisted thin strips of puff pastry. They can be sweet (sprinkled with sugar, almond nibs, etc) or savory (parmesan and cayenne pepper, gruyere and thyme, etc). 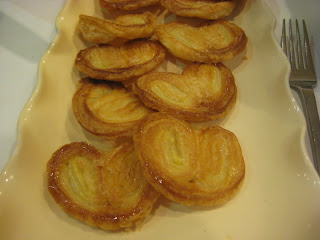 Now, some tips from today!

- When making anything with puff pastry, make sure it's really cold before you blast it with heat in the oven. You might want to put it in the fridge for 10 minutes before baking.

- Do not egg-wash the edges of puff pastry, or you will seal them and they won't puff properly.

- Parmesan goes really well with a pinch of cayenne pepper. Try it on bubbling cheese toast, cheese sticks, or in a cheese souffle.

- When puff pastry is cooked, its best to cut through it with a bread knife (AKA a serrated knife).

- John Dory (AKA St. Pierre, so named because it has the "thumbprint of St. Peter" on its cheek) is a deliciously favored flat fish. Try it with a ginger or orange sauce. Be careful when you're filleting it- it has some pretty serious spikes!

- Lentils are a good source of protein 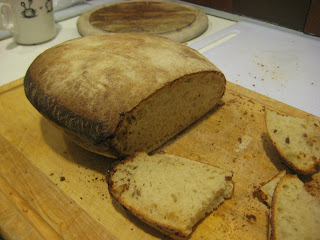 Just for a parting laugh, check out the results of my first Ballymaloe sourdough loaf. After 72 hours of waiting, I burned it baking tonight. Wah wahn...