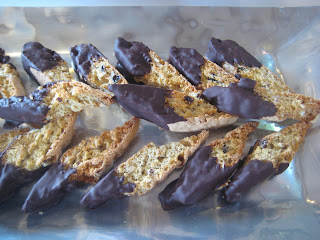 This morning, we hit the ground running with a brief lesson on biscotti, the celebrated "biscuit of the week". These twice-baked slices of sweetened "bread" come in all sizes and can keep for months (no joke, just ask my sister Kate). They're best enjoyed with a glass of Vin Santo (a Tuscan dessert wine) or a hot cup of tea. 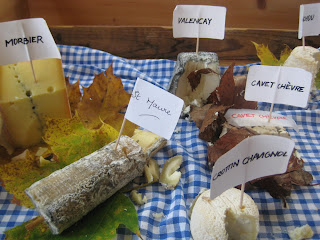 Then we moved onto our cheese category of the week, the motley French cheese crew. As you can probably imagine, this family of cheeses is as diverse as the Jolie-Pitt's, only much more interesting. They will either be fermier, i.e. made on a farm, or laitier, from a commercial factory. If it's made with our old friend, raw milk, you'll see fermier au lait cru on the label. Some common varieties include:
- Saint-Maure, a full-flavored chevre (goats cheese) of a cylindrical shape. The signature straw that runs through the middle lets you know its fermier.
- Valencay, a more subtle goat flavored chevre, shaped like a pyramid with its top chopped off. Its surface is almost always coated in "cendre", or ashes (this puts it in the chevre cendre subcategory).
- Crottin, small little rounds of chevre, so named, I am not making this up, because of their resemblance to animal dung (crottin means just that in French)! Crottin de Chavignol, a well known chevre, falls into this crappy category (pardon my french).
- Fleur du Maquis, a Corsican raw sheep's milk (or ewe's milk) cheese, so named because its rind is coated with pine needles and other debris from the "undergrowth" (maquis means undergrowth in French). Freshly made in the summer, it practically bursts from its rind. As it matures, it gets firmer.
- Morbier, a semi-firm cows milk cheese, with a signature line of ash down the center of the wheel. The ash separates where the cheesemaker layered first the morning's milk and then the evening's milk into the cheese molds. 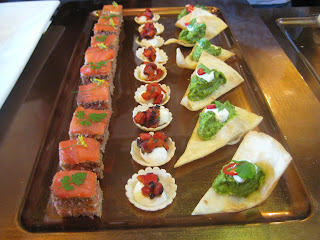 The list goes on and on, but it was time to move on to the morning's Canape (or "finger food") demonstration! Canape have really blown up over the last five years as our obsession with bite-sized morsels has skyrocketed. Now, pretty much everything under the sun could be turned into tiny treats. It's a fun way to entertain guests, especially if you choose items that can be prepared ahead of time! 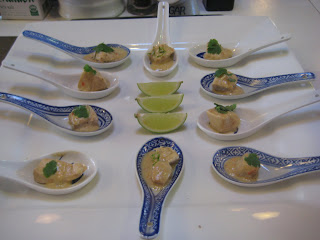 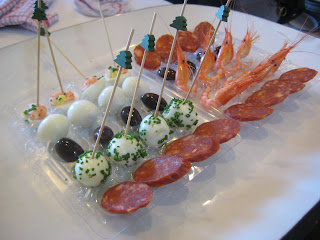 After a delicious lunch (as usual), we headed into the afternoon demonstration, which focused on the art of making sushi! One thing is for sure, you do not have to train for five years under a sushi master in Japan to be able to make delicious sushi at home. Before the class, the exact words from my mouth to another student were "I would always just order my sushi in". After the demonstration, I am a homemade sushi convert, and am eager to throw a sushi making party! It is easy, fun, delicious, and healthy. A great Girls Night In activity. 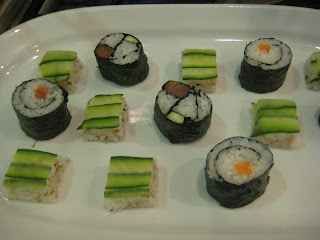 Wednesday's tips:
- Wild salmon, when smoked, is not as greasy as smoked farm salmon.
- Check out Eric Treuille's cookbook, Canapes for some good ideas.
- Pomegranates are in season!
- Soak satay sticks (AKA shish kabob skewers) in water for half an hour before you use them to cook meat. They'll get saturated, and will be less likely to burn.
- We use Mani Olive Oil from the Mani Peninsula in Southern Greece. Whatever oil you choose to use, make it a good one!
- In general, Hass avocados (with the rough-textured dark brown skin) have the best flavor.
- Check out the Food Section in each Saturday's Financial Times.
- Cut flowers can be quite expensive. When entertaining this Christmas season, think outside the box for decorative arrangement ideas! Rory showed us how you can take long stalks of Ruby Chard, put them in a tall clear glass vase, and there you have a unique bouquet! Use them a couple days later in Ruby Chard soup.
- Sashimi is raw fish. Sushi refers to the specific type of rice, which is prepared in a specific way. Therefore, if you do not like raw fish, you can still make authentic sushi as long as you use the right rice and prepare it properly.
- Sushi, by definition, needs to be made with sushi rice. Buy "No. 1 Extra Fancy" brand. For some unexplained reason, technically it should only touch wooden surfaces (so lay it on a wooden tray, and stir with a wooden spoon).

- When buying Japanese products like miso or dashi powder, generally the ones without any English on the packet are the most authentic, and probably the best.

- When buying fish for sushi, let your fishmonger know that you are planning to eat it raw. Ask him if he has any type of fish fresh enough to use for sushi. If no, use smoked fish, cooked crab, cooked shrimp, and other non-raw fillings.