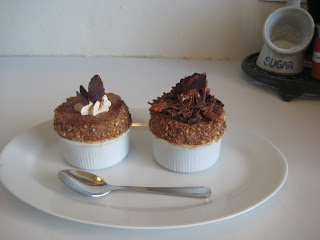 Friday came with the end of week seven! I got in early with two objectives: 1) finish my souffle and 2) pluck my pheasant. No problem. My souffles had set overnight in the fridge, so I sprinkled some almond praline bits along the side and decorated the tops with whipped cream and chocolate chards. To make almond praline, put 1 part whole almonds (skin on) and 1 part sugar in a saucepan to melt. When it turns a deep caramel color, turn the mixture onto parchment paper (or a silicon mat) to harden. You can then grind it in a food processor (it's great on ice cream, too!). 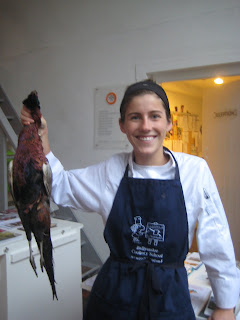 The pheasant was less pleasant (above, I'm grinning like an idiot because I haven't started yet). It wasn't so much the plucking as it was the post-plucking obstacles that got to me. After plucking out the feathers, you have to singe off the tiny hairs on the skin with an open flame. This obviously results in very foul smelling fowl. Then you cut off the head and pull off the "crop" (basically a sack on a bird's neck filled with everything it ate the day it was shot - in short: a recipe for a gag reflex). Then you gut the animal and clean it for cooking. It will become very obvious exactly where the bird was shot, if you know what I mean. Clean that out! You dejoint it just like a chicken.

Note: Paprika and Cayenne Pepper are NOT the same thing! Someone accidentally put cayenne pepper in the paprika jar, and I added two entire teaspoons to my pheasant sauce! I accept full responsibility for not tasting it before I chucked it all in. For the rest of the class, my teacher and I gave my sauce emergency CPR. If you're ever in a similar fix, and your sauce is back-of-the-throat spicy, take out half and thin the remainder with chicken stock or some equally neutral ingredient. Sugar and lemon juice could help as well. You might be able to rescue it! 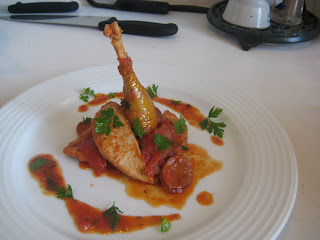 During lunch, we had a small presentation from a wine producer in Tuscany who served us a "Super Tuscan" red to taste. Like France, Italy has strict classification rules for their wines (wines from certain regions must be made with certain grapes). Super Tuscans break the rules and don't use the required grapes. Rather, Super Tuscan producers experiment with blending grape varieties to get the ultimate flavor. It was delicious! 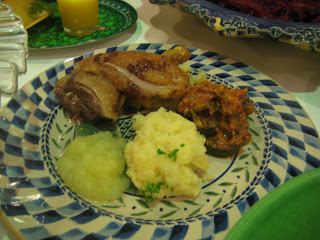 For our afternoon demonstration, we went over how to make sour dough bread, Jerusalem Artichoke soup, Roast Duck with potato stuffing and apple sauce, Roast Stuffed Loin of Pork, various vegetables (like mashed parsnips and spiced eggplant), chocolate mousse with almond macaroons, and different flavored meringues (pistachio & rosewater and cinnamon & hazelnut). We have definitely shifted gears, and are full fledge into late fall flavors. Gutsy game like goose and duck go great with robust winter herbs like sage and rosemary. Move over, Basil! 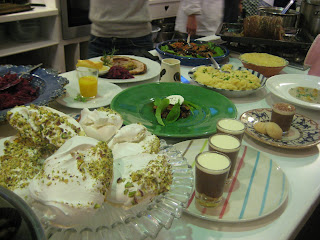 - Tart sauces (like gooseberry, rhubarb or apple sauce) are good with fatty meats (like pork or duck).

- Of all meat, pork reacts the worst to being intensively reared (i.e. pigs crammed together and flooded with hormones and antibiotics). In other words, there is the greatest change in flavor between organically reared and intensively reared pigs.

- The fillet of a cow or pig rests comfortably protected by the animal's spine, and does little to no work. This is why it is so tender (and so expensive!).

- Ducks are much fattier birds than chicken, so expect a thicker layer of fat when you buy and eat them.

- When rendering down fat, add a pinch of salt to the Pyrex jug before it goes into the oven. The fat will turn into liquid faster.

- As I've mentioned before, there are two golden rules when stuffing a bird: The stuffing must be cold when it goes in (or else it creates a nice warm cavity for bacteria to flourish) AND the stuffing must not completely fill the bird's cavity (or else the heat cannot circulate and the bird will not cook through).

- Sage and Rosemary tend to compete for center stage. Pick one!

- Duck and orange are a classic combo - try adding orange zest to your gravy or stuffing!

- I had heard about adding a little coffee to your chocolate dishes to enhance the flavor, but I hadn't heard of adding some strong Earl Grey tea! Try it (I certainly will)! Other ideas: chili flakes, various booze, orange zest, etc.

- Red Cabbage and Apple is a great combination.

- Pistachio, cardemon, and apricot is also a great combination
Posted by Binny at 2:13 PM