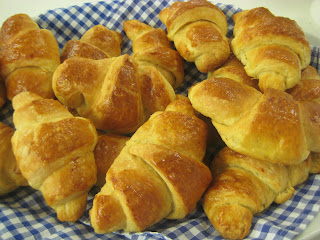 This morning I got in early to roll out my croissant dough once more before shaping it into crescents. Like puff pastry, you want to fold it over and over to create lots of thin layers (within reason, don't go bananas- too many and it will puff up and topple over). I also prepared a loaf of granary bread, which is made with a grainy, hearty, malty tasting "Granary" flour. Finally, I made a "Moroccan Snake" dessert (an almond mixture rolled up with filo pastry, twisted into "snakes" and wrapped into a coil) and pan-seared squid with garlic and parsley butter. 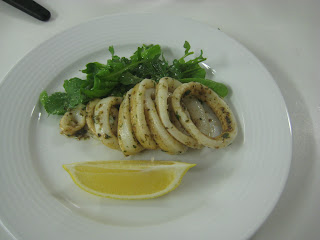 The squid is a pretty incredible creature. When you disembowel it (for lack of a less gruesome verb), you pull out a clear, feather-shaped length of cartilage that could easily double as a quill (seriously- it looks like a clear, plastic feather quill that you would get with a cheap William Shakespeare Halloween costume). Together with the ink sacs from under the squid's eyes, you could put together a pretty creepy alternative to the age-old fountain pen Christmas present. Just a suggestion. 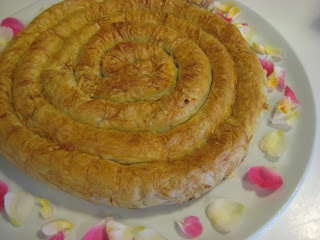 The "Morrocan Snake" was fine, though a little tedious. Filo pastry is incredibly delicate but definately worth the hassel. Try experimenting! You can wrap brie with it for a baked brie cheese plate, or make filo pastry parcels filled with goats cheese to put on a green salad, or whatever your little heart desires. Make sure you paint each layer with melted butter. 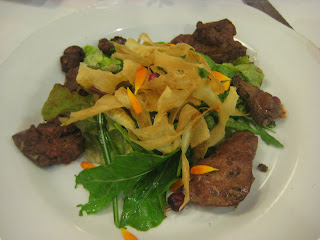 For our afternoon demonstration, we watched Rory make a couple different chicken liver salads, seared tuna with various sauces (including Moroccan chermoula), homemade pasta!, a Tarte Francaise, vol au vents, croissants, and pain au chocolat. It was as if he knew I had just returned from Paris, craving the recipes for all the treats in the bakery windows! 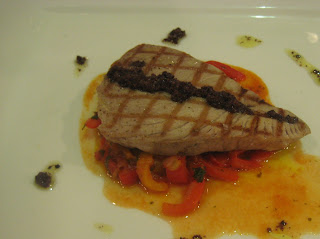 Pain au chocolat is made with the same dough as croissants, so feel free to make both variations the morning you bake them off. You make vol au vents by baking small shapes (usually rounds) of puff pastry. They puff up in the oven, so that when you remove them, you can cut off the "hats" and hollow them out into little containers. You fill them with a layer of creme patisserie and neatly arranged fruit. A Tarte Francaise is a puff pastry recepticle filled with rows of glazed fruit (no creme patisserie). 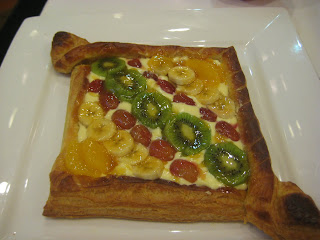 We made pasta today, impressively (READ: foolishly) without a machine! You just make the dough, rest it for half an hour, and roll it with a rolling pin as thin as you can muster. Alternatively, you can purchase an attachment to your Kitchenaid that rolls pasta into flats for you. There are other attachments to cut it into tagliatelli or pappardelle or whatnot. This past Labor Day weekend at a friend's house in Virginia, we had a pasta making party one night. Everyone stood around the kitchen island with glasses of wine and balls of dough. It was so much fun and so delicious! However, I definitely do not recommend this "party idea" if you don't have the machine!

- When a recipe calls for pastry to be rolled out to a certain demension, draw out a border of this dimension in the flour on your rolling surface. This will give you a guideline.

- A clothes drying wrack works perfectly for drying your thinly rolled flats of pasta. You want them to get slightly leathery before cutting them into strips.

- Tuna is in trouble. Particularly the coveted bluefin and yellowfin tuna. The school has to show us how to cook it, but it is incredibly over fished.

- There is a reason Tuna is so popular: it is high in omega, has no pin bones when you're filleting it, and has a great meaty texture.

- When you're roasting red peppers, roast them whole, allow to cool and then remove the skin. Open them to remove the seeds, but do NOT run them under the tap to rinse out the seeds. This will wash away a lot of the flavor.

- When cooking chicken livers, cut them in half horizontally if they are too thick. This will ensure a nice, even cook. If you try to cook the thick ones whole, they'll get crusty on the outside before they're cooked on the inside (remember, though disguised, this is still chicken; it needs to be cooked through).

- Zucchinis continue to cook when you remove them from the heat. Bare this in mind.

- With a Tarte Francaise, you want a decent fruit to pastry ratio. The fruit slices should be tightly packed in, "not thrown in from a distance" (-Rory).

- Tuna should be cooked rare (basically still raw in the center). It is best juicy, not dry. Beware, it will continue to cook when you take it off the heat! Unlike steak, you do not need to rest it. Straight to the table!

- Fresh pasta cooks in a remarkably short period of time. Test it after 60 to 90 seconds- it may be done!

- Never cook more than a single layer of chicken livers in a pan at one time.

- Once you fill vol au vents with creme patisserie, they have a very short shelf life. You should really eat them within the half hour to get the textured effect of the crispy pastry coupled with smooth cream.