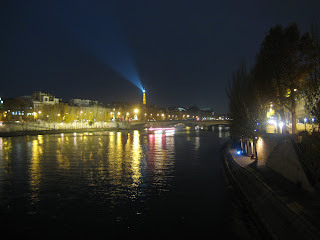 Saturday morning, one saintly housemate drove me to the Cork Airport for the morning showing of To Catch a Plane: Part II. The flight went swimmingly, and I arrived at Charles de Gaulle ready for an all too brief 24 hour Parisian extravaganza. One of my beautiful hostesses, Camille, picked me up and casually chatted as we drove around the Arc de Triumph en route to her apartment. I, on the other hand, practically had my nose pressed against the window! What a city! It had been a long time since my last visit as a distinctly brace-faced teenager, with a palette that glanced longingly at the Parisian McDonald's and shivered at my frog-leg-ordering Grandmother across the table! The joke's on me. 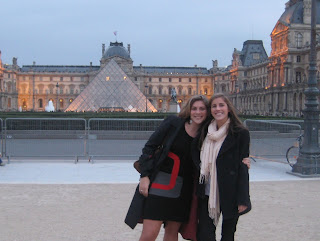 After dropping off the luggage and catching up on their beautiful terrace, we headed to meet up with Camille's sister Amalia. And, luckily enough, it was time for my second favorite thing (after breakfast) each day, lunch! My hostesses took me to Eric Kayser's boulangerie down the street. It was all I could do not to whip out my camera and start taking pictures of the food display! I was a kid in a candy store. A huge selection of breads covered one wall, and a display window ran along another, filled with quiche, sweet and savory tarts, tiny dessert tartlets, cakes, pastries and everything in between! After painful deliberation, I got a piece of an artichoke quiche, followed by a "mi-cuit au chocolat" (AKA a mini chocolate cake with warm molten chocolate inside), followed by a cappuccino. It was a taste of heaven. 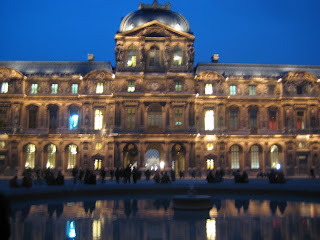 Then we strolled towards the Seine, crossed over to the Tuileries Gardens, walked through the Place du Carrousel, circled around to the back side of the Louvre, and back across the river towards Notre Dame. The buildings only seemed to get more beautiful as twilight set in! Again, what a city! For dinner, Amalia and Camille organized a large group of us to eat at Chez Justine in the "Oberkampf" neighborhood. I had salmon tartar with gratin potatoes and a sharply dressed green salad. And, of course, plenty of baguette to go around! After a few glasses of wine, my high school French unfortunately introduced itself to the table. Other than that car wreck, it was a delightful evening! 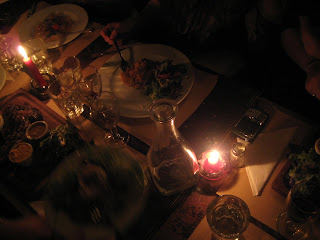