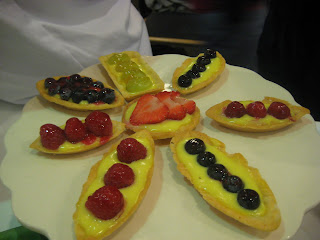 Phew, what a day! I got in early to get a jump start on my cooking (and brought my cheese with me- he might as well be on a leash). I had to make chocolate souffle, Thai galangal and coriander soup, and white soda bread (I was on "white bread duty"). I got the bread out of the way early, and started on my souffle. That's when it all went down the drain.


With souffle, you want to have all your components ready to go before you start, because once you start you cannot stop. So I dutifully wrapped my souffle dishes in parchment paper, melted my chocolate, sponged and dissolved my gelatin, whipped my cream, and separated my eggs before I began step one: beat the egg yolks and sugar. I was supposed to get it to a mousse-like consistency before adding the chocolate, which took not 5, not 10, but 45 minutes of beating with a standing mixer! Clearly something went wrong. I stood glaring at the liquid, which absolutely refused to thicken, while simultaneously trying to keep my melted chocolate in good humor and my dissolved gelatin from having a temper tantrum. I also had a pot on making almond praline (to grind up later for dusting on the souffle) and some chocolate melting in the oven to make decorative chards. Needless to say, I was a little overextended.


In the end, my gelatin threw a hissy fit and I had to start it over. My chocolate miraculously survived the 45 minutes without curdling (though it certainly tried- the climax of my morning was when I frantically plunged the bowl of chocolate into an ice bath, splashing everywhere). The souffle finally went into the fridge at 11 AM. Moral of the story: souffles have a sick sense of humor. Frazzled and faklempt, I quickly tidied my section and threw together the contents of the soup. By lunch, my souffle hadn't set (you saw that coming), so I'll get in early to decorate and finish the lil' terror tomorrow. 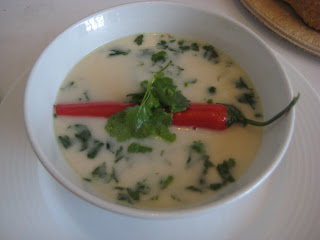 We walked into the afternoon demonstration room to find about ten whole birds (feathers and all!) on the counter. Tom Duane, the local gamekeeper, presented a variety of pheasants, ducks and pigeons (all are in season) which he had shot over the weekend. I'm assigned to make pheasant tomorrow, so it looks like I'll be in early to pluck one! 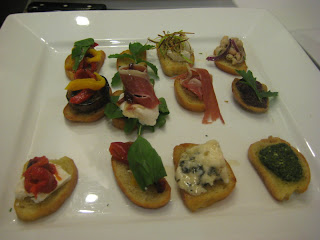 We also learned how to cut up a rabbit for cooking, and how to make bruschetta & crostini, baked chicken (in a dutch oven - extra tender and juicy!), various pheasant and rabbit dishes, roast pumpkin, pate sucre (pastry with a high proportion of sugar), fruit tartletts, and bread & butter pudding. Unfortunately, we didn't have a rabbit "in the fur" to cut up, because Tom hasn't caught one yet (at this time of year, they only come out at night)! So we used a cultivated rabbit from France.

To finish off the day, we had an evening wine lecture with the sommelier from the Ballymaloe House on wines from Italy. Two of the students in our class are experts in Italian wines, and one helped give the lecture! Thanks to them, we tasted three wines from a small producer in Friuli (North-East Italy). One of the wines was made with 100% Schioppettino grapes, a grape variety that nearly became extinct until this particular wine producer saved it in the 1970's. It is now one of the most popular grapes from the region. We also tried a Chianti and a wine similar to an Amarone (whatever that means). 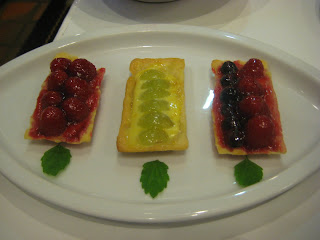 - Pheasants are originally from China, and were brought over to Europe by the Romans. There are over 40 varieties!

- Female pheasant sport a much blander plumage than males, because they have to blend into the landscape while nesting.

- All hunted birds should be hung by the neck for 3-5 days before plucking. Hang rabbits and deer by the legs.

- With birds, the smaller and shorter the "spur" on their foot, the younger the animal. Younger birds are more tender to eat.

- For obvious reasons, it is best to pluck birds outdoors.

- When making brioche, work quickly with the dough or the butter in it will melt. Also, do not leave the loaves or rolls to rise anywhere that is too warm, because the butter will run out of the dough.

- Dry whole chickens or turkeys with some paper towel or they won't brown properly in the oven.

- As much as possible (when it makes sense), cook meat on the bone (bones add more flavor).

- Butchering any animal (chicken, pheasant, rabbit, cow, pig) is all about the natural space between the ball and socket joints. You can either take the E-ZPass lane and glide through the ball and socket, or you can get in the cash-only lane and hack through bone. You decide.

- Never cook with wine that you wouldn't drink yourself. Taste it!

- Dark chocolate (like 70% cocoa) seems to behave better than milk chocolate (~50% cocoa) when you're melting it. It splits less because there is less cocoa butter in it.

- Adding a pinch of sugar to frozen peas (either in their cooking water or after they've cooked) can greatly enhance their flavor
Posted by Binny at 11:42 AM