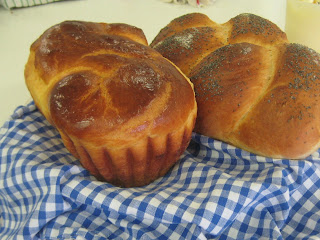 brioche and white yeast bread, respectively
Black Friday. I awoke thankful that I wasn't in line at Toys R' Us, elbowing hundreds of other over-eager Christmas shoppers ('tis the season!). I got my onions for the French Onion soup in the saucepan straight away, so that they could gradually darken throughout the morning. The recipe called for 3 pounds of finely sliced onions, and half the kitchen made the soup. Let's just say everyone was really "emotional" during the preparation stage!

I also made white yeast bread, finished my brioche, and labored through the orange mousse (it's not exactly a whip-up-'n-go recipe). But, it was worth the effort. Light, creamy, and possible to prepare ahead of time- make it the morning of a dinner party and pop it into the fridge! 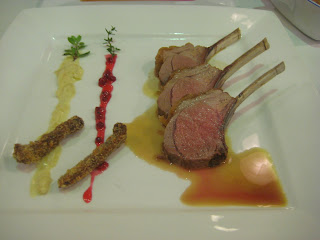 Then we were off to the afternoon demonstration, where Rory showed us how to make mussel soup, Moules Provencale, roast rack of lamb, onion sauce, a gratin of potato and mushroom, Cucumber Neapolitana, and Pommes Dauphine. For dessert, he made various types of flavored meringues, some sandwiched together with whipped cream to form a layered cake, and others rolled up with whipped cream to make a "Meringue Roulade" (see below!). 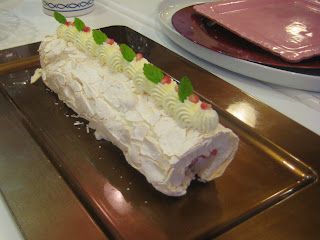 To translate some of those cryptic titles, Moules Provencale is a mussel dish. You cook the mussels, open them to the "half shell", and then stuff them with herbed garlic butter and breadcrumbs. You can brown them under a grill right before serving (there's a picture below). Cucumber Neapolitana is a stewed onion, cucumber, and tomato side dish (it's cream based). Pommes Dauphine is a heart-attack delight. Whoever Dauphine was, she really liked her potatoes rich! It's mashed potatoes mixed with choux pastry (basically, eggs and butter), rolled into balls, and deep fried (seriously). 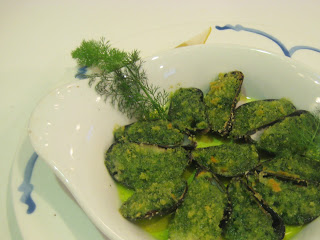 - Before you cook mussels, check to make sure they are all tightly shut. If you notice one is open, tap in on the counter and it should close. If it doesn't close within a short period of time (say, 20 seconds), the mussel inside is dead, and you should not cook it. There is no grey area with shellfish, the general rule of thumb being "if in doubt, throw it out". Here in the land of no waste, that expression turns heads.

- When you buy mussels, they should have a faint and pleasant smell of the sea, not an overpowering fish bait smell.

- Some people recommend that you soak mussels overnight in a bucket with oatmeal sprinkled into it. This "feeds" the mussels before you cook them, plumping them up (like Hansel and Gretel). But, Rory finds that this artificial plumping ruins the flavor.

- Rory removes the mussel's "beard" (the string of hairs that connected a mussel to a rock, a buoy, or, God forbid, the hull of your boat) after cooking, rather than before ("I'd prefer to be scalped when I'm dead").

- Save your mussel cooking liquid (also known as "mussel juice"... no, Arod, not that type of mussel juice). Like duck fat and chicken carcasses, it is incredibly valuable! If you could turn flavor into gold, these things could make you a millionaire three times over. You can reduce the liquid until its flavor is where you want it (not too bland, not too salty), and then save it to add to fish soup, relevant sauces, etc.

- Rest rack of lamb after cooking for 10-40 minutes in a low oven (so it keeps warm). If juices are pouring out onto your cutting board while carving it, it could have rested longer (better luck next time!).

- As always, when making meringues, the egg white & sugar mixture should be whipped to the point where you could hold the bowl upside down over your boss' head and not be worried.

- The rack of lamb is the most expensive cut of the lamb.

- Whip egg whites in a squeaky clean and dry bowl. Any residue of oil or detergent or whatnot will deflate them.

- A "French Trimmed" rack of lamb is the cut that has the eye of the loin with the ribs still attached. The bones must be neatly cleaned of any fat or membrane. You can roast a French Trimmed rack whole, and then easily carve portions of chops for your guests at the table. The chops will look like lollipops, with the rib as the handle and the eye of the loin as the "sucker".

- When roasting a rack of lamb, you might want to wrap the protruding, bare bones with a layer of tin foil to keep them from burning. It's nice precaution, from a presentation angle.

- Rory takes croutons seriously. He heats the perfect tiny cubes in a pan, tossed in clarified butter, not in the oven and certainly not deep fried. You have to stir them with constant vigilance ("nothing else happens in life when you are cooking croutons!"), lest they overcook on one side.

- When melting chocolate or dissolving gelatin (or raising children), don't stir it impatiently. Let it do its own thing. It will come around.

- Be really careful when reheating any soup that you have thickened with flour (flour + butter = roux, used to thicken sauces, soups, etc). They are much more likely to burn. Also, once reheated, don't leave it boiling away or it will curdle. If it does curdle, a blender can sometimes bring it back.